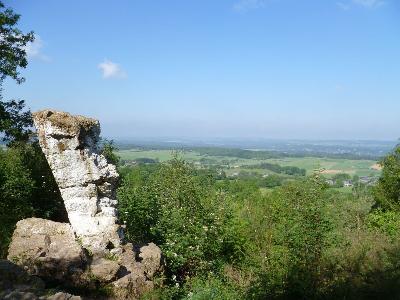 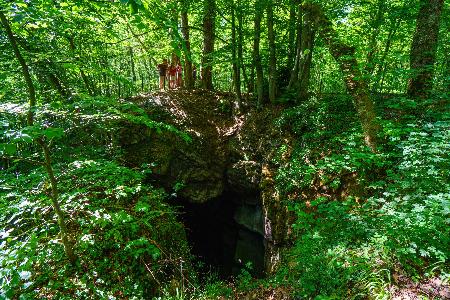 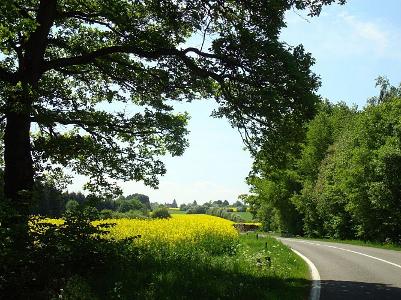 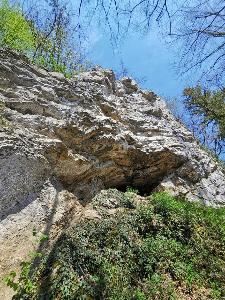 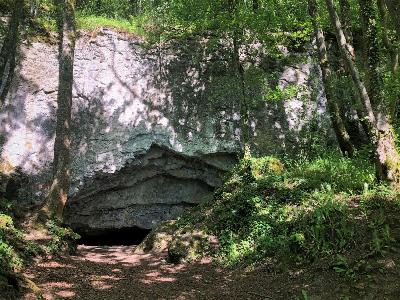 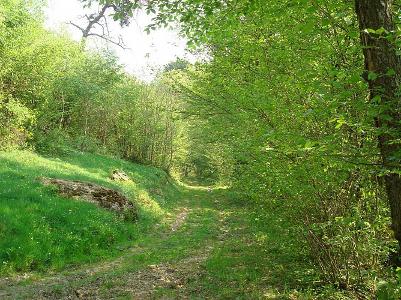 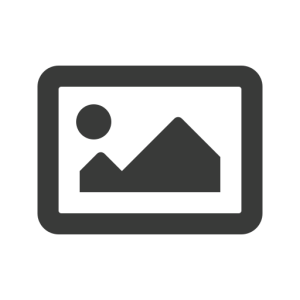 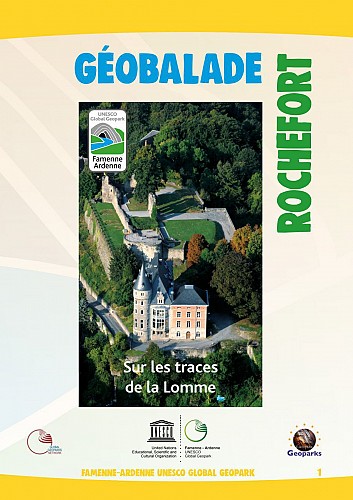 "Tracing the courseof the Lomme"
This geotrail starts from the centre of Rochefort and leads to Jemelle via the RAVeL 150 cycle path, along the valley of the Lomme. The valley here follows the limestone strip and is shaped by major karst phenomena. The return to Rochefort is along the left bank of the Lomme, climbing up to the edge of the Gerny plateau and including a suggested detour to visit the Gallo-Roman villa in Malagne. 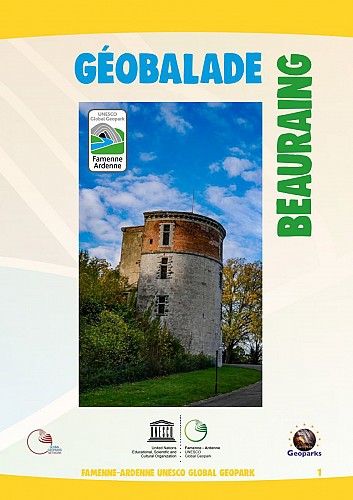 Begin your walk around Beauraing by walking through the Parc du Castel with its castle perched on the heights of the Calestienne, looking down across the town and the Famenne depression. Once you have left behind the town centre, its narrow lane and the site of the apparitions of the Virgin Mary, the rest of the trail continues along the limestone strip. This trail will take you to unusual geosites such as the Neuville travertine and the Martouzin take-off area. The final part of the trail follows a pretty GR footpath between the fields and the wall of the Parc de Castel. 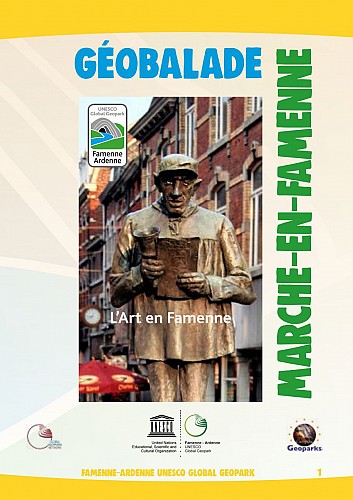 "Art in Famenne":
This trail takes you on an extraordinary journey through the capital of the Famenne and its walkable landscapes, from the green retreat of the Fond des Vaulx valley to the town of Marche-en-Famenne and the village of Waha, best known for its church. The trail makes its way along country paths, small country roads and streets and lanes. It also makes a delightful cycling route. From a geographic point of view, it offers a striking illustration of a type of karst phenomenon characteristic of the Geopark: the swallow-hole/resurgence system. 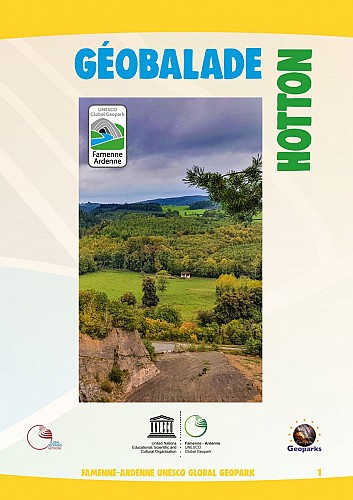 Hotton lies within the Famenne in the Ourthe valley, just downstream of where the river runs through the limestone layers of the Calestienne. This trail will take you from one side of the Calestienne to the other, on both sides of the Ourthe valley. In the river valleys (Ourthe and Agauche), erosion has revealed the limestone rock in spectacular fashion, perfectly illustrating the almost vertical inclination of the strata. Elsewhere, it is mainly disused quarries that provide a better understanding of the region’s geology and the role it has played in shaping the landscapes and the development of local socio-economic activity: ancient buildings, mineral resources, agricultural methods. Capping it all, the Caves of Hotton offer visitors a chance to see for themselves what lies underground. The shorter option for this trail covers 7.3km, increasing to 8.9km if you take the routes via the Agauche stream, the Calestienne Garden and the Isbelle resurgence. 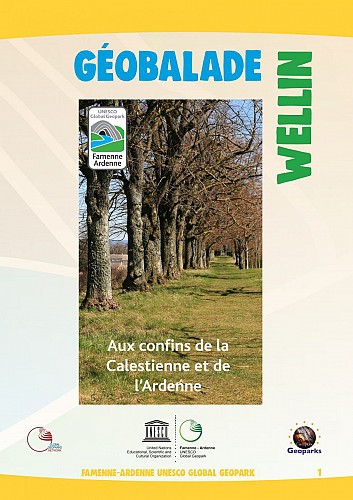 UNESCO Global Geopark Famenne-Ardenne: Wellin Geotrail "On the borders of the Calestienne and the Ardennes"

"On the borders of the Calestienne and the Ardennes":
Welcome to this countryside walk around the town of Wellin, the starting point for your geotrail exploring the Famenne-Ardenne Geopark. Before getting started, let’s take a quick look at the history of Wellin, which stretches back a very long way. A series of archaeological excavations has shed some light on its early origins. The town takes its name from Wadalinus, a Frankish landowner. These different digs, which unearthed some richly furnished 6th century tombs, were instrumental in dating the origins of the town at least back to this period. They also provided proof of habitation, uncovering 80 post holes for wooden houses, indicating that Wellin was the centre of a vast Merovingian estate. 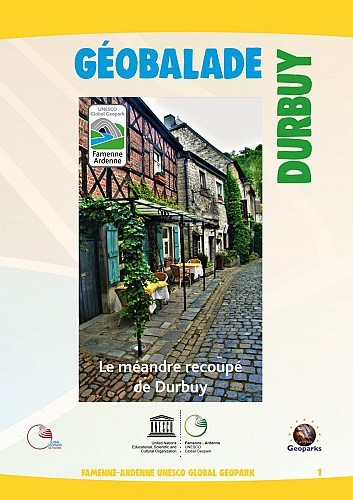 "The Durbuy meander cutoff ":
Durbuy owes its existence to its remarkable geological setting. The town first came into existence as a military stronghold, located on a tight loop of the River Ourthe, encircling a limestone outcrop. This strategic position combined two advantages: the outcrop provided a solid vantage point on which to build the fortress, and the meander offered a natural defence against attackers. A thousand years on, it is by no means easy to imagine how the landscape would have looked at the time of this human conquest. In addition to all the building that has taken place in the intervening centuries, the course of the River Ourthe itself has also shifted. This suggested trail gives you some idea of what that initial landscape would have looked like, including an unobstructed view of the Ourthe, the line of its long-vanished branch, and a chance to observe both the large and the small Durbuy anticline. The nameof Durbuy is thought to derive from the Celtic duro-bodion, “ the dwelling place near the fortress”. As an added bonus, the trail also takes you through the old town with its well-preserved ancient houses and cobbled streets.

This website uses cookies to improve your experience while you navigate through the website. Out of these, the cookies that are categorized as necessary are stored on your browser as they are essential for the working of basic functionalities of the website. We also use third-party cookies that help us analyze and understand how you use this website. These cookies will be stored in your browser only with your consent. You also have the option to opt-out of these cookies. But opting out of some of these cookies may affect your browsing experience.
Necessary Always Enabled
Necessary cookies are absolutely essential for the website to function properly. This category only includes cookies that ensures basic functionalities and security features of the website. These cookies do not store any personal information.
Non-necessary
Any cookies that may not be particularly necessary for the website to function and is used specifically to collect user personal data via analytics, ads, other embedded contents are termed as non-necessary cookies. It is mandatory to procure user consent prior to running these cookies on your website.
SAVE & ACCEPT